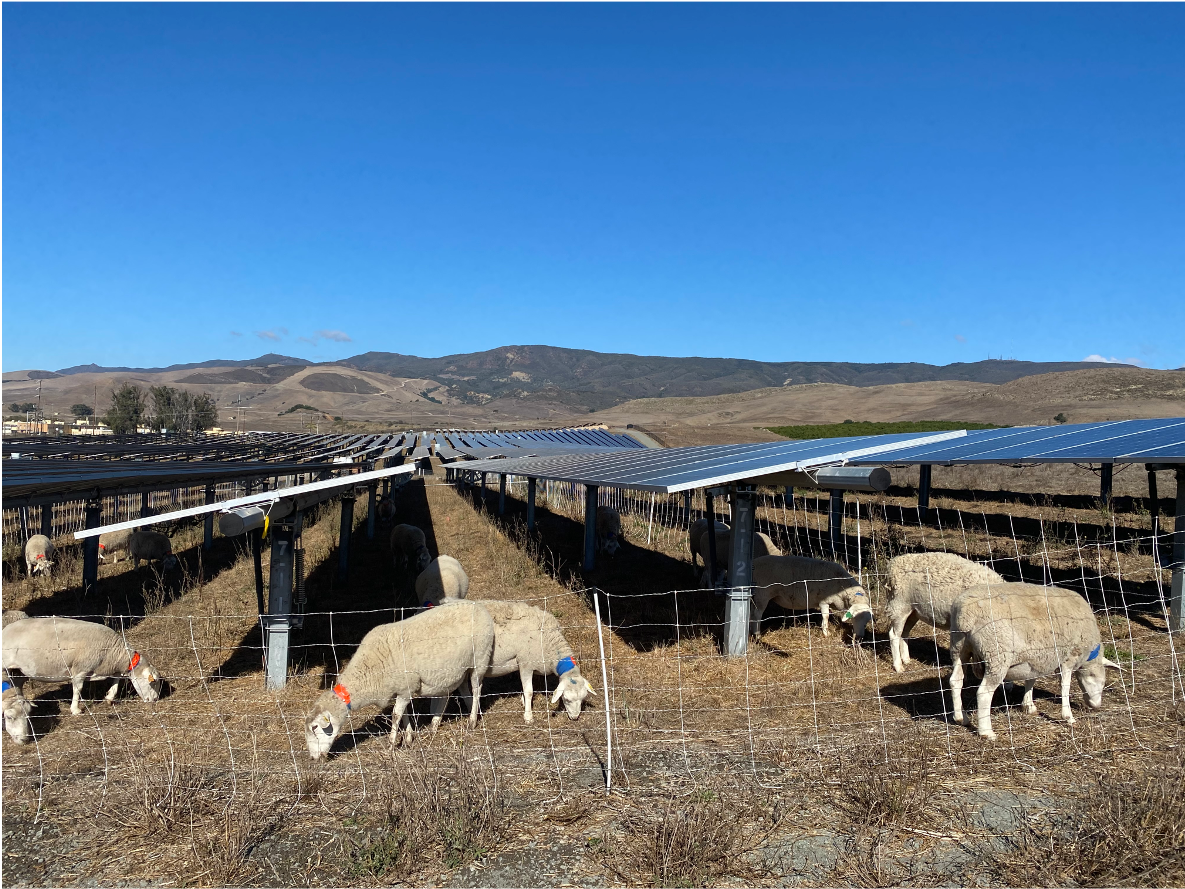 It takes more than a global pandemic and severe drought to dampen Animal Science Assistant Professor Zach McFarlane’s enthusiasm for studying the grazing behavior of sheep, which can provide positive benefits to rangeland management while also decreasing fire hazards.

His research project, titled “The Effect of Solar Panels on the Grazing Behavior of Sheep,” involves students, mostly undergraduates. McFarlane believes that part of his mission is to help students “gain valuable experience working with animals and collecting data. I included undergraduates to give them valuable experience that provides them a solid foundation in science. I’ve been fortunate to have great undergraduate students in the past, four of whom have gone on to graduate school after being part of my research program.”

McFarlane’s own interest in grazing cattle and their nutritional needs developed while he was pursuing his doctoral degree. Now in his fourth year at Cal Poly, he is continuing that work, now with sheep.

“I wanted to continue pursuing grazing management research at Cal Poly because it provides opportunities to connect with local producers and stakeholders,” he said. “When I first moved back to California, it seemed the entire state was on fire.

“Sheep have a different grazing behavior than cattle,” he continued. “However, sheep are a great model for some of the monitoring techniques and technology that I want to utilize in my research in beef cattle.”

Sheep grazing can be used to manage rangeland and agrivioltaics, which is when land is co-developed for both solar photovoltaic power and for agriculture. “It’s where agricultural land and energy production intersect,” McFarlane explained.

McFarlane aims to improve rangeland management by using sheep to break down forages in areas and minimize fire-related issues. “Targeted grazing management helps reduce shading of solar panels to capture sunlight while also reducing fire hazard,” he said. “The result could be a win-win for solar companies and contract grazing specialists. This collaboration presents an opportunity for livestock managers to provide forage resources for their animals while also providing a necessary service for solar companies and other at-risk public spaces.”

While McFarlane has been engaged in similar research for the past seven years, Cal Poly Sheep Unit Manager Beth Reynolds approached him with the idea of using sheep.

“Beth has been incredibly instrumental in getting this project off the ground and managing the project every step of the way,” he said. “She supervises Cal Poly’s herds of goats and sheep, which contract to create fire breaks around campus dormitories as well as at sites throughout the county. She and her herd manage land that could be at risk of wildfires.”

The researchers started in November 2020 and finished in early February. They conducted their study at the Gold Tree Solar Farm on campus, the university’s former sheep farm. Graduate student Emma W. Kampherbeek, who came to Cal Poly from Wageningen University in the Netherlands, was an invaluable member of the team.

“Emma was an absolutely vital leader of the research team,” McFarlane said. “Her dedication and perseverance during the project were outstanding. She managed all aspects of the project, including experimental design, statistical analysis, and training undergraduate students. Students like Emma are the reason I love what I do.”

“We were not able to conduct the research while grass was growing, so we want to investigate grazing during different times of the year,” McFarlane said. “One snapshot in time is not enough to learn best grazing practices; however, we found that a mix of rotational and continuous grazing, according to forage conditions, might be the most effective grazing management strategy within a solar array facility.”

The project has been a boon to Learn by Doing. “Students helped collect forage samples and processed them to determine the nutritional value of the forage,” McFarlane said. “Students also helped monitor sheep behavior throughout the day and moved them from pasture to pasture. A data logger around their necks helped us to monitor their behavior.”

McFarlane said that the COVID-19 pandemic caused some unique challenges. “Not only did we work while maintaining social distancing, but we also had a shortage of student helpers. Normally I have students knocking down my door to gain research experience.”

The drought also created obstacles. “We were expecting rainfall, which would have allowed the grass to grow and feed the sheep. This would have resulted in different behavior,” McFarlane explained. “Meeting nutritional requirements was difficult. With Mother Nature, you never know what to expect, but that is part of livestock production: Expect the unexpected.”

McFarlane hopes this pilot study will open the door for future collaborative research.

“I have reached out to several faculty members in the College of Agriculture, Food and Environmental Sciences that might have some interest. We hope to look at differing soil conditions and wildlife that may be using the site along with the sheep. There are certainly many different opportunities to collaborate in the future.”